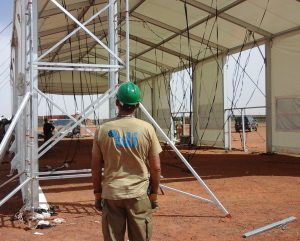 TDI provides a turnkey vehicle maintenance solution to the UN in Mali. Three bespoke tented workshops have been established in Northern Mali for the maintenance of light, heavy, armoured and soft skin vehicles, plant and equipment. These tented workshops are fitted with air conditioning, extraction ventilators and state-of-the-art interlocking flooring technology. They were built to provide a protected environment in heavy wind and high temperatures and to withstand sand and rain storms.  A 4th workshop is due to be constructed shortly however in the meantime we are utilising an existing structure.  Challenges faced thus far have been severe logistical issues such as untraversable roads, weather disasters, extreme temperatures and dust storms but teams have persevered and are producing a noteworthy performance. TDI also provides rapid-response support teams comprising of qualified technical staff who perform mechanical repair support for ground troop operations and road convoys throughout Mali. This project is ongoing. 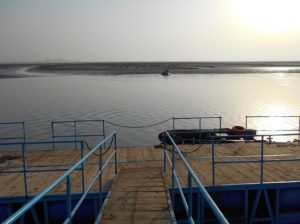 In September 2015, TDI was tasked to assess the potential Explosive Remnants of War (ERW) threat within the inter-tidal drilling operations area of BGP INC in Kuwait.  Based on a site visit, a comprehensive Risk Assessment was compiled along which included recommendations to mitigate the risk which may be posed by the presence of ERW within the project area, and in so doing bringing it to within an acceptable safe working level for BGP personnel and equipment.TDI proposed a Geophysical Survey and Anomaly Avoidance (GSAA) program. TDI used a combination of manual, hovercraft and zodiac motorised boat platforms, mounted with Long Loop Metal Detectors and data logging equipment to capture and record the data. A total of 1662 km was surveyed within the intertidal area up to a depth of 2m in 78 working days. Over 400 anomalies were detected and avoided.

In March 2015, in support of Saudi Arabian Chevron operating in Kuwait, TDI provided EOD and Mine Clearance support for the construction of a new pipeline from Wafra Farms to Mina Saud. The project involved the deployment of Mine Detecting Dogs and a Battle Area Clearance capacity to ensure that the corridor for the proposed pipeline was free from explosive ordnance. Two BLU 61 sub-munitions were located during the upgrading of the gatch road that runs parallel to the pipeline and as such the presence of UXO was suspected.The pipeline also passed through two former minefields that, although previously cleared in 1993, required verification to eliminate the potential mine risk. In this particular case, no items of ERW or UXO were located in the 6602m2 subsurface search allowing construction teams peace of mind to continue their work. 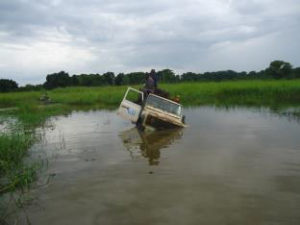 Between August 2014 and January 2015, TDI provided two teams to conduct Emergency Route Verification and Clearance in parts of South Sudan. The teams were predominantly located in the south of the country during the rainy season and once conditions dried out sufficiently in the north, the teams were then in a position to conduct operations for route verification of six important roads in that area. During the months of September and October the team faced many environmental challenges. The rainy season, flooded regions and rivers prevented access to many locations and where access was possible, progress was very slow. A major achievement was crossing the seemingly impossible ‘wet gap’ and finalising the verification of an anti-tank mine location on a particular route. Teams opened many routes that were previously untraversable. In addition, the teams also assisted with clearance of the Rubkona Airfield Extension during periods of insecurity and instability in the region. 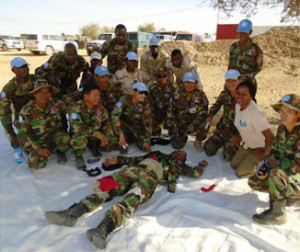 TDI were contracted by UNOPS to provide Basic First Aid Training in Mali to MINUSMA personnel from Troop Contributing Countries (TCC) in several locations in Mali. The training of potentially lifesaving first response protocol was delivered by six experienced Medical Trainers to 2,800 peacekeepers from countries including Chad, Guinea, Senegal, Cambodia, Nepal, Bangladesh and Niger.Delivered in the northern Malian regions of Gao and Kidal, the training was required following the increase in attacks on MINUSMA peacekeeping troops. Each peacekeeper completing the training was also provided with an Individual First Aid Kit (IFAK)

MINE RISK EDUCATION, EMERGENCY MINE ACTION AND REHABILITATION THROUGH DEMINING, SOMALIA, UNOPS 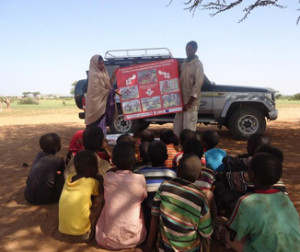 TDI was contracted by UNOPS in 2012 to provide a range of mine action services including Mine Risk Education in two provinces in South Central Somalia. Four 2-person teams were recruited from the local area and trained in in the delivery of mine risk education. During the fifteen month project, the TDI MRE teams delivered MRE to 137,609 individuals over 4,867 sessions. 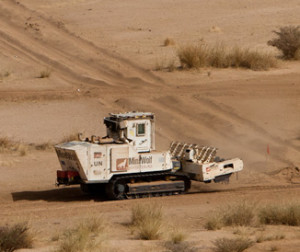 In 2010, UN Mine Action Office in Sudan required a capacity to operate and maintain the UNMAO MineWolf MW370 to ensure maximum productivity and clear some long standing Dangerous Areas.

TDI partnered with an operating team from MineWolf Systems and deployed to Khartoum, commenced selection and training of a suitable contingent of Sudanese staff and deployed into the Kassala region in east Sudan. Two months later the machine was moved south to the Blue Nile State, where it remained for the next seven months, clearing various DAs until the onset of the rains when it returned to Khartoum.

TDI carried out 11 months of operations, ensuring full productivity with the machine and in November 2010 cleared more landmines than the entire Mine Action Programme did for both north and south Sudan for the whole of 2008.

RAPID RESPONSE CAPACITY IN SUPPORT OF THE REFERENDUM IN SUDAN, UNOPS 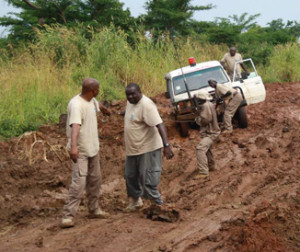 In 2010 the UN Mine Action Office in Sudan required a rapid response management and operating capacity to provide support to the UN for thousands of independent observers who were due to enter into the country in support of the referendum. Mine Action support was required in order to ensure their safety throughout the process.TDI deployed six manual clearance teams to the Blue Nile and South Kordofan regions in a very short space of time. The teams conducted detailed surveys of DAs, as well as carrying out spot EOD demolitions. TDI also funded a very successful Mine Risk Education programme that ran alongside the clearance teams.The team cleared or discredited areas where there were suspected threats ensuring that the UN database was sufficiently updated to accurately reflect the state on the ground. TDI carried out five months of accident-free operations in which numerous DAs were attended to and cleared. 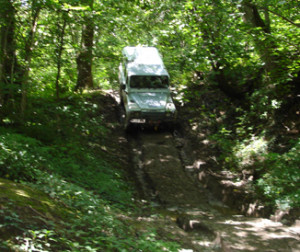 In 2008, TDI was awarded a Survey/ EOD contract by UNOPS DRC.Operations commenced in Katanga Province and moved north. Access to task areas was a serious challenge given the state of the roads and weather conditions however TDI were able to carry out the required surveys and assessments required by the UN. A fourth team was mobilised in mid-2009 to cover South Kivu Province. At the end of the project, 15,612km of road and 2475 villages have been surveyed in one of the most challenging theatres in Africa. 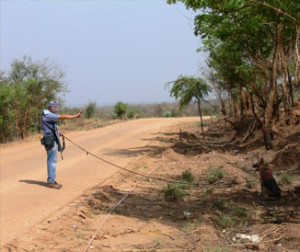 In 2008, TDI was awarded a three year contract to support a multinational US construction company who were constructing a 220 km road from the Ugandan border to Juba through areas that saw significant combat during the war.TDI deployed a mechanical flail/ tiller machine with two manual-clearance teams and a mine detection dog team and set to work on the road knowing that they had to balance the client’s need for cleared area and speed against the threat posed by the ordnance and the need to move carefully. The teams worked superbly in support of the client, leapfrogging up and down the road, ensuring that the client had sufficient clear ground on which to work.Over 30 landmines, including R2M2s which are hard to detect, and 300 items of unexploded ordnance were removed from the corridor along which the road construction crews worked. The dogs provided invaluable support confirming areas as clear and locating some items of UXO. 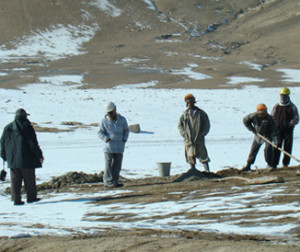 A multinational US construction company building a new 100-megawatt power station on the outskirts of Kabul contracted TDI in 2008 to provide demining support to its construction crews. The task was complicated by the fact that the area to be cleared was a former military firing range and in order to fit into the client’s construction schedule, TDI had to deploy in the middle of the harsh Afghan winter.TDI used a combination of mechanical and manual teams and recruited a group of local national Afghan deminers. In order to deal with the frozen ground TDI deployed an armoured excavator which was able to penetrate the frozen layer of ground, lifting soil and spreading it in an area where the deminers using metal detectors could search it. Temperatures well below freezing did not deter the deminers who were the only team working in Afghanistan at the time. TDI completed the task within schedule and, as a result, the power plant moved into full production.

In 2006 TDI was contracted by a large security company to provide emergency mine clearance in support of a recovery crew looking to retrieve an aircraft that had skidded off the end of the runway at Juba International Airport into an area suspected of containing mines.TDI deployed a manual-clearance team to cut an access lane up to the aircraft and then establish a perimeter around the aircraft. The aircraft recovery crew then set up their specialised equipment and gained access to the aircraft.Despite hot, humid conditions and grass well over two metres high, the team were able to clear the area around the plane safely, allowing for its recovery to a safe area. The task was completed on schedule and the aircraft went back into service. 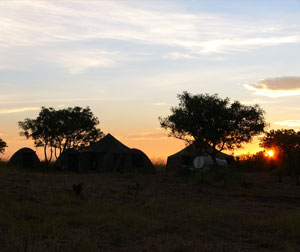 In 2006 TDI was contracted by a Spanish oil company to provide representation, remote logistics support and business services in Juba, Southern Sudan.TDI secured premises and set up an office providing a full range of business services on behalf of the client.  TDI attended high-level meetings on behalf of the client and were available 24/7, providing logistical support for client executives when they were in Juba. In addition, TDI provided office support in Nairobi.